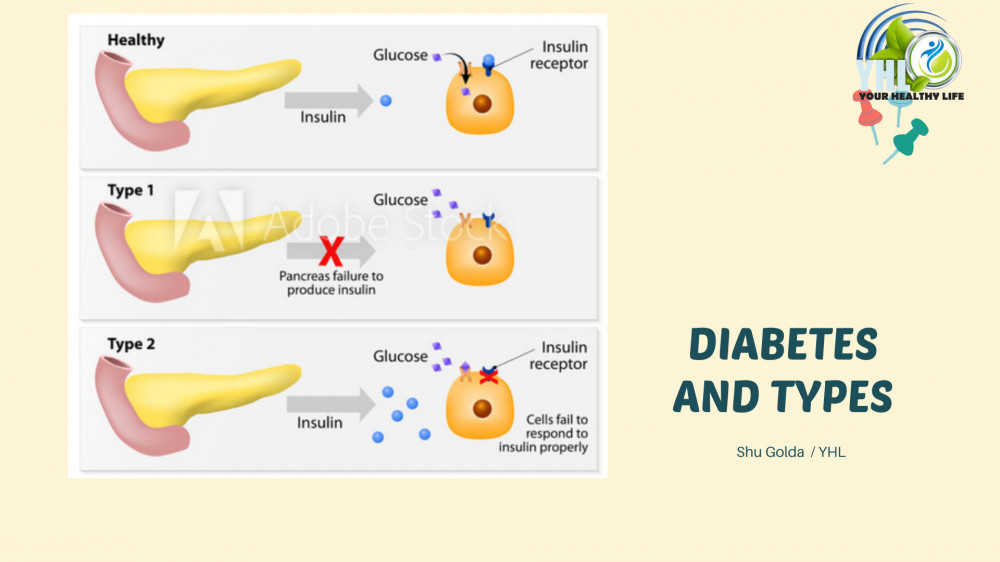 Diabetes Mellitus (DM) is a complicated metabolic problem that is characterized and identified by persistently high levels of blood sugar in the absence of treatment. This situation is also known as hyperglycemia.

When food is eaten, the body during the process of digestion breaks down carbohydrates to glucose and sends it to the bloodstream. Insulin (a hormone) then controls the sugar levels in the blood by signaling the liver, muscle, and fat cells to take in glucose from the blood and store it up as glycogen. In a diabetic patient, there are defects in insulin secretion, insulin action, or both, and disturbances of carbohydrate, fat, and protein metabolism. This dysfunction of insulin causes spikes in blood glucose levels.

There are different types of DM; type 1 DM, type 2 DM, and a temporary condition in pregnant women known as gestational DM.

Type 1 DM, also known as juvenile diabetes or insulin-dependent diabetes, is an autoimmune disease. It is mostly diagnosed in kids first but can occur at any age.

The pancreas is an organ responsible for the secretion of insulin in the body. In type 1 DM, the immune system (the body natural defense mechanism) attacks healthy pancreatic cells and destroys them. The immune system mistakes pancreatic cells as foreign and damages them. As a result, the secretion of insulin by beta cells of the pancreas is impaired. Self-destruction of pancreatic cells can happen over a few weeks, months, or years. When the beta cells of the pancreas are destroyed, your pancreas secrets little or no insulin. Thus glucose regulation in the body fails, leading to hyperglycemia, which is an abnormal rise in blood glucose levels.

The causes of this destructive process (autoimmune reaction) are not fully understood. But a likely explanation is that the combination of genetic susceptibility (conferred by a large number of genes) and an environmental trigger, such as a viral infection, initiate the autoimmune reaction. Toxins or some dietary factors have also been implicated.

Signs and symptoms of type 1DM include;

In the case of suspected type 1DM, one of the following tests will be carried out

Other recommended tests for diabetes type 1 include blood or urine tests to check for the presence of ketones which, result from the breakdown of fats to provide energy. Also, antibodies specific for type 1 DM can be checked in blood.

Diabetes Mellitus (DM) is a complicated metabolic problem that is characterized by persistently high levels of sugar in the body. This situation is also known as hyperglycemia. Diabetes either results from the inability of pancreatic beta cells to secret insulin (type1) or failure of the insulin response mechanism (type 2).

Type 2 diabetes used to be known as adult-onset diabetes, but now it can affect people at any age, including children. However, it is more predominant in middle-aged and older people. It results from insulin resistance; there is impaired uptake of blood glucose by fat, liver, and muscle cells. This leads to high blood glucose(hyperglycemia). As a result, the body needs more insulin to help glucose enter cells. At first, the pancreas keeps up with the added demand by making more insulin. Over time, the pancreas doesn’t make enough insulin when blood sugar levels increase, especially after meals. Summarily, with type 2 diabetes, the body resists insulin effects or produces insufficient insulin to maintain normal glucose levels

Type 2 diabetes results from an interaction between genetic(Inheritance) and environmental factors. Several lifestyle factors are known to be important to the development of type 2 DM. These include physical inactivity, sedentary lifestyle, cigarette smoking, and generous consumption of alcohol.

There is a strong inheritable genetic connection in type 2 diabetes, having relatives (especially first degree) with type 2 diabetes increases the risks of developing type 2 diabetes. Moreover, obesity (which is an independent risk factor for type 2 DM) is strongly inherited.

Many medical conditions can potentially give rise to type 2 DM. These include obesity, hypertension, and elevated cholesterol (combined hyperlipidemia). Other causes include acromegaly, Cushing syndrome, thyrotoxicosis, pheochromocytoma, chronic pancreatitis, cancer, and drugs. Additional factors found to increase the risk of type 2 DM include aging, high-fat diets, and a less active lifestyle.

Tests for screening and diagnosis of DM are readily available. The test recommended for screening is the same as that for making diagnoses, with the result that a positive screen is equivalent to a diagnosis of pre-diabetes or diabetes. Most diabetes patients already have microvascular complications at the time of diagnosis, suggesting that they have had the disease for more than 5 years at the time of diagnosis.

Someone with a single raised glucose reading with symptoms (polyuria, polydipsia, polyphagia, and weight loss), otherwise raised values on two occasions, of either fasting plasma glucose (FPG) ≥7.0 mmol/L (126 mg/dL) or with an oral glucose tolerance test (OGTT), two hours after the oral dose a plasma glucose ≥11.1 mmol/L (200 mg/dL) is considered diabetic. An additional diagnostic criterion for diabetes is an HbA1c result ≥of 6.5%

Prediabetes occurs when insulin in the body does not work efficiently, leading to glucose build up in the body. Moderately higher than normal levels of blood glucose indicate prediabetes.

Prediabetes is diagnosed by a blood test. The patient’s fasting blood glucose is tested. If values range from between 100 and 125mg/dL, then your doctor might want to conduct the A1C blood test. This test is a confirmatory test that measures the average blood glucose within 2 to 3 months.

You should be tested for diabetes if you are age 45 or older. You should also be tested if you are younger than 45 and have any of the risk factors listed above.

Risk factors for GDM include:

Other types of diabetes

LADA is a heterogeneous disease characterized by a less intensive autoimmune process compared to classical type 1 diabetes mellitus due to a lower evolution of B-cells failure. It shares similar features with both type 1 and type 2 diabetes mellitus with initial insulin dependence which later advances to a degree similar to type 1 diabetes. This can lead to a misdiagnosis of type 2 diabetes. A typical characteristic of LADA is the presence of specific autoantibodies for the islet cells. LADA is more prevalent in adults than in children.

Signs and symptoms of LADA include;

LADA is diagnosed by usual diagnostic methods for diabetes. After the diagnosis, your doctor might want to determine the specific type of diabetes. LADA is specifically diagnosed by examining the presence of autoantibodies against islet cells in diabetic patients who do not require insulin. The autoantibodies can be measured using the GAD antibody test

Due to the slow development of LADA, diagnosed patients may depend on their insulin for a couple of months or years to regulate blood sugar. They will however require insulin in the long run due to the progression of the disease

This diabetes is associated with failure in the functioning of b-cells, as a result of a monogenic defect. B-cells are the cells responsible for the secretion of insulin in the pancreas. This form of diabetes is characterized by impaired secretion of insulin with little or no consequences on insulin action. The genes involved in this defect are inherited in an autosomal dominant pattern.

The onset of hyperglycemia in MODY is usually at an early age (below 25years).

Some unusual causes of diabetes can result from genetically determined changes in insulin function. These metabolic changes which are associated with alterations of insulin receptors can lead to hyperinsulinemia (excessive secretion of insulin), modest hyperglycemia, and then diabetes. Before, this form of diabetes was called type A insulin resistance to diabetes.

Diseases of the Exocrine Pancreas.

Any disease that affects the pancreas can cause diabetes. Damage to the pancreas must be extremely severe for diabetes to occur. Examples include pancreatitis, trauma, infection, pancreatectomy. However, cancers that affect only a small portion of the pancreas are associated with diabetes.

Some hormones have the ability to antagonize insulin action and cause diabetes. This occurs mostly when the individuals have preexisting defects in insulin secretion. Examples of such hormones include glucagon, cortisol, and epinephrine. Excess amounts of these hormones can cause diabetes. However, this hyperglycemia can be resolved when the excesses in hormone secretion are also resolved.

Insulin secretion can be impaired by certain drugs. They may not cause diabetes directly but precipitate diabetes in individuals with insulin resistance. In such cases, the classification is unclear because the sequence or relative importance of b-cell dysfunction and insulin resistance is unknown. Intravenous pentamidine can destroy b-cells permanently. Also, nicotinic acid and glucocorticoids can alter insulin functioning.

The prevalence of diabetes is increasing daily, affecting more people across the world. In response to this growing burden, we can only: prevent diabetes, cure diabetes, and take better care of people with diabetes to prevent devastating complications.