HOW ARE BEETS GOOD FOR DIABETICS? 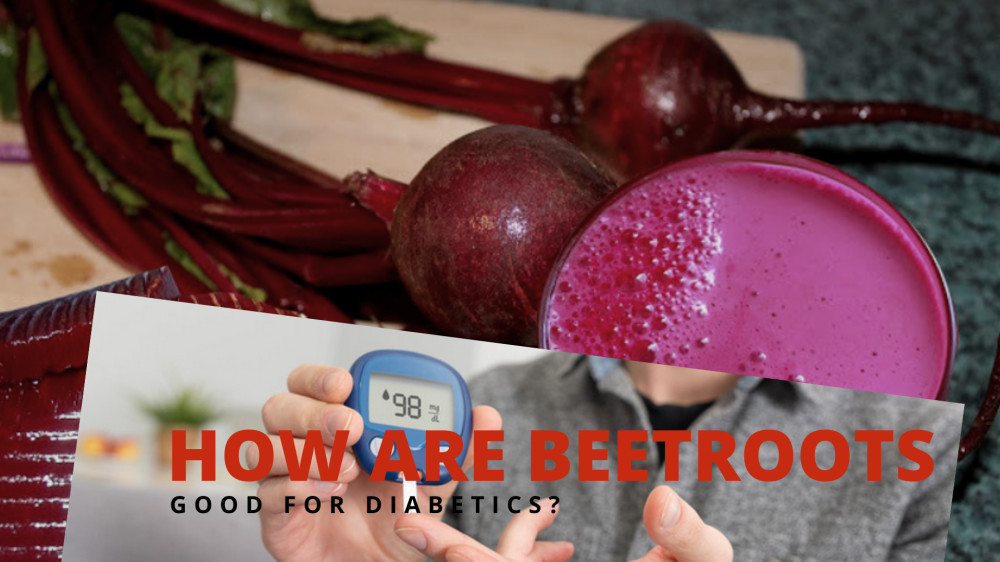 Vegetables are mostly great for diabetics and are always part of their dietary plans. However, some root vegetables are rich in natural sugars and should be avoided for fear of blood glucose spikes.

Beetroots are often described by many as a superfood. It has been used for centuries to treat fever, constipation, and skin complaints. Beets are generally deep red but have white, golden, stripy white, and red variations. Researchers are now investigating its effects on blood pressure and diabetes.

Studies have shown that beets demonstrate a range of powerful effects that can help reduce the impact of diabetes mellitus.

Beets are a plentiful source of folate, an important B-vitamin. Each one-cup serving provides 37 percent of the recommended daily intake (RDI). They are a good source of manganese, providing 22 percent of the RDI of the mineral per cup. Beets also contain no cholesterol and very small amounts of fat.

Red beetroots (Beta vulgaris rubra) are said to be a rich source of phytochemicals and health-promoting bioactive compounds like polyphenols, flavonoids, and anthocyanins. They also are amongst the few veggies which contain red-violet bioactive pigments called betalains, betacyanin, or betaxanthin. (1)

One cup of raw beet contains:

Other vitamins and minerals contained in beets include:

The impact of beets on diabetics.

Below are the positive benefits of beets for people with diabetes: (3)

According to a study in 2014, which investigated the effects of beetroot juice on blood glucose levels after eating, it was reported that drinking 225 milliliters, or a little less than half a cup, of beetroot juice, resulted in significant suppression of post-meal glucose levels. This is because beets are rich in phytochemicals which have a regulating effect on glucose and insulin in humans.

Diabetes can lead to complications that can affect different parts of the body such as the eyes, heart, kidneys. In addition to that, diabetes also causes damage to your small blood vessels (microvascular) and larger blood vessels (macrovascular).

Studies show that antioxidants, such as those found in beets such as betalains, reduce the risk of diabetes complications, including retinopathy, kidney disease, neuropathy, and diabetic foot disease, cardiovascular disease. These antioxidants help prevent diseases by scavenging free radicals, which can destroy body cells. The process of cell destruction by free radicals is called oxidative stress. Beets also contain other chemicals that prevent inflammation, associated with severe health disorders

According to a small 2017 study by Beals JW et al, obese participants who consumed beet juice with carbohydrates demonstrated lower insulin resistance than non-obese participants suggesting that obese individuals may benefit from consuming beets and other nitrate-rich foods. (2)

There’s some evidence that one of the metabolites found in high concentrations in beets may reduce insulin resistance.

The same metabolite is found in human blood levels but is lower in people with insulin resistance, prediabetes, and cardiovascular risk factors than in healthy people

An earlier study by Wootton-Beard PC et al found that healthy participants who consumed beet juice during a meal had lower insulin and glucose responses following the meal. However, in 2013, Gilchrist M, et al carried out a study of 27 individuals with type 2 diabetes who drank beetroot juice daily and found no improvement in insulin resistance. These studies involved a small number of participants, and more research is needed. Reduced insulin resistance may be one of the benefits of eating beetroot and may potentially benefit individuals with diabetes.

Diabetes is usually associated with high blood pressure, and beetroot has shown to have the ability to lower blood pressure. This is due to the presence of nitrates within it. These nitrates increase blood circulation and help blood cells enlarge.

Physical activity is one of the control measures of diabetes. It decreases the risk of heart diseases and other cardiovascular disorders in diabetics. Beetroots improve tolerance during exercise by enhancing the ability of muscles to consume oxygen.

Are beetroots risky for diabetics?

The American Diabetes Association encourages eating beets. There are no known risks to eating beetroot if you have diabetes. Unless you are allergic, the only risk is beeturia which is the passing out of stool or urine that appears red or pink but this is usually not harmful because it is caused by one of the compounds in the beet that gives the vegetable its color.

How to consume beets

There are several ways to consume beets as diabetics

Some popular juicing combinations, for one serving, include:

As part of their control measures, diabetics have to maintain blood glucose at target levels, nutritious diet, exercise, and positive lifestyle habits. Beets help lower blood pressure, reducing complications of diabetes, and in enhancing exercise performance. They are rich in fiber, nitrate content, folate, potassium, and metabolites. Although they have a glycemic index of 64, the natural sugars in beetroot do not easily convert into glucose, thus preventing spikes in glucose levels.

Your Healthy Life has provided some or more useful information and reviews in managing diabetes. Kindly visit the below titles;