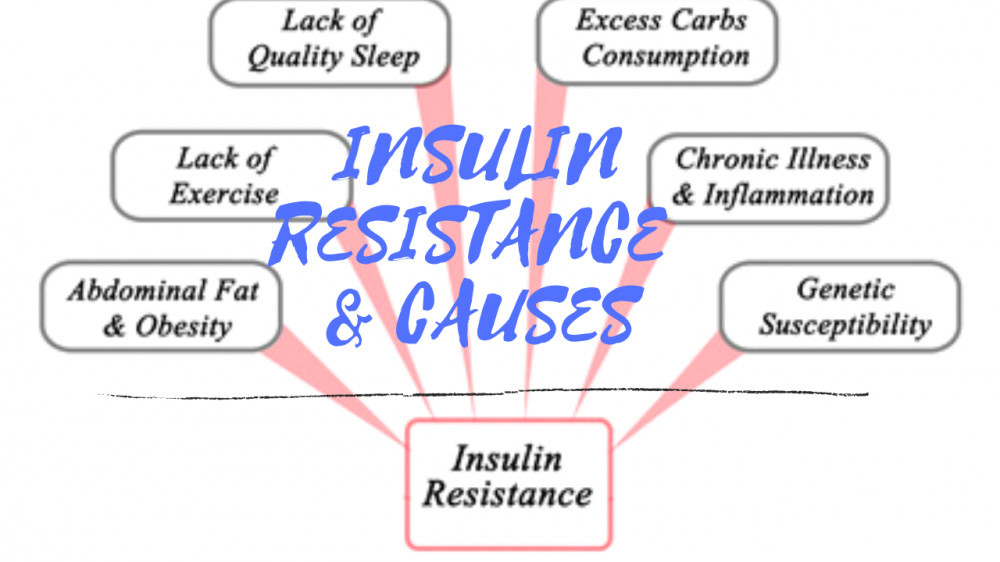 Insulin resistance is a condition whereby the body cells suddenly become less sensitive to the hormone insulin. In order words, there is so much lack of communication between insulin and the body cells. In this blog post, we shall expose some of the main causes of this metabolic dysfunction and why these parameters cause insulin resistance.

The exact cause of insulin resistance is still a dilemma to many researchers, and as many scientists did explore this complicated condition in which three primary metabolic tissues that are sensitive to insulin become insensitive to insulin, so were some key parameters held accountable for this metabolic dysfunction.

Consuming too many calories like high-sugar, high carb, or any high-calorie diet disrupts the cell and usually results in insulin resistance. Eating high-calorie foods, the high carbs are being broken into glucose, and the fat nutrients are split into fatty acids or triglycerides, which are all absorbed by the blood.

Triglycerides are used as sources of energy during extreme starvation or when glucose sources are depleted. The arrival of glucose in the blood signals the brain to instruct the pancreas to secrete the hormone insulin. Secreted insulin then migrates to the cell and binds to insulin receptors on the cell membrane. At the membranes, insulin induces insulin receptors allowing glucose to find their way into the cell’s power house-the mitochondria, where glucose is converted to fuel (energy).

Since high-calorie foods are involved, there is an increase in blood glucose levels and hence an increase in the secretion of insulin, which forces the cells to take in glucose. Moreover, the body stores a good amount of blood sugar in the muscles and later in the liver. Much of this glucose in the muscles is converted into glycogen –the form in which energy is stored, through the process of glycogenesis. Since there was an increase in blood glucose level, the muscle cells are also filled with excess glycogen causing the cells to be forcefully fed with excess blood glucose. When this keeps going on, the cells are left with no choice to shut down their insulin receptors to lower energy flow. This condition of cells’ reluctance to accept glucose entry is known as insulin resistance.

2) Obesity as a cause of Insulin Resistance.

Obesity, as mentioned by Olga T. Hardy et al., is the massive growth of adipose tissue depots that surfaces from the chronic consumption of excess calories of the individual’s energetic needs.

Other experts like You D. et al., 2017, reported that obesity-induced insulin resistance is likely influenced by genetics and environmental factors. Cells are capable of integrating signals from the environment through changes that modify the DNA or the proteins that arrange the DNA while keeping the DNA sequence intact. These changes are known as epigenetic, and a good example is DNA methylation, where a methyl group (one carbon and three hydrogen molecule) is added to a cytosine base of the DNA sequence. Since the enzymes DNA methyltransferases (Dnmt) speed up DNA methylation, it was evident that one of these enzymes, DNA methyltransferase-3a (Dnmt3a), played an important role in the development of insulin resistance. Inhibiting this enzyme causes more glucose to be taken up by fat cells in response to insulin. This was confirmed when some mice, when subjected to a fat diet after their Dnmt3a was removed, experienced similar weight gain as normal or wild type mice.

You and his collaborators further found a gene Fgf21, which encodes a protein that enables fat cells to absorb glucose, and this gene is poorly expressed (or poorly transcribed) when Dnmt 3a is overexpressed. This gave a satisfactory summary that the protein Dnmt 3a contributes a role in obesity-induced insulin resistance. And targeting FgF21 or Dnm 3t may improve treatment opportunities for insulin resistance and other obesity-related syndromes. However, more work is still to be conducted to bring out the clarity of these contributive factors.

Insulin resistance is known to arise due to the disturbance in lipid metabolism and elevated levels of free fatty acid (FFA) circulation that accumulate in insulin-sensitive regions like the adipose tissues, endothelial cells, liver, and muscles.

These FFA or nonesterified fatty acids (NEFA) are seen in great amounts in obese people where they cause insulin resistance and play a major link between obesity and atherosclerosis, a CVD that involves the build-up of fats and cholesterol in the arterial walls, disturbing blood flow.

FFA cause peripheral (muscle) insulin resistance by inducing the inhibition of insulin-stimulated glucose uptake and the synthesis of glycogen. Moreover, increase levels of plasma NEFA for 4hrs also cause hepatic (liver) insulin resistance and subsequent increase in hepatic glucose production as a result of the hepatic accumulation of Diacylglycerol (DAG). Free fatty acids here slow down insulin-mediated suppression of the breakdown of glycogen to glucose (glycogenolysis).

As if it’s not enough, an authoritative review on metabolic syndrome, headed by Eckel and his Co in 2005, states that a major contributor to insulin resistance development is an excess accumulation of circulating fatty acids.

A way we can remedy or avoid this in the future is to correct obesity and high FFA by decreasing our calorie intake and maximizing our calorie expenditure.

4) Sedentary Lifestyle and Physical Inactivity as a Cause of Insulin Resistance.

A sedentary lifestyle is one with little or no physical activity, and good examples include listening to music, sleeping, watching the TV, reading, playing games, spending more time on your mobile phone, etc. A decrease in physical activity usually spikes cholesterol and triglyceride levels, which are all linked to insulin resistance.

When you become inactive for a given period of time, your insulin tends to work less. Aerobic exercise like swimming, brisk walking, cycling, running, etc. burns more calories, while resistance training has been recommended to build more muscles, which burns more glucose. So those with sedentary lifestyles lack all these and end up with a surge in blood glucose levels, which may be force-fed into the cells resulting in insulin resistance.

Being physically inactive brings about the gene expression of some key proteins that regulate insulin signaling, glucose transportation, and glycogen synthesis in muscles that may arise to glucose intolerance. Sedentary lifestyles also cause adipose tissues to secrete little or no specialized proteins called adipokines, which are known to regulate insulin sensitivity. Other proteins at the level of the skeletal muscles are reduced due to inactivity, and this lower glucose uptake by these muscles, triggering insulin resistance.

Insulin resistance is known to occur even in a short period (1-7 days) of physical inactivity with a minute or no weight gain. 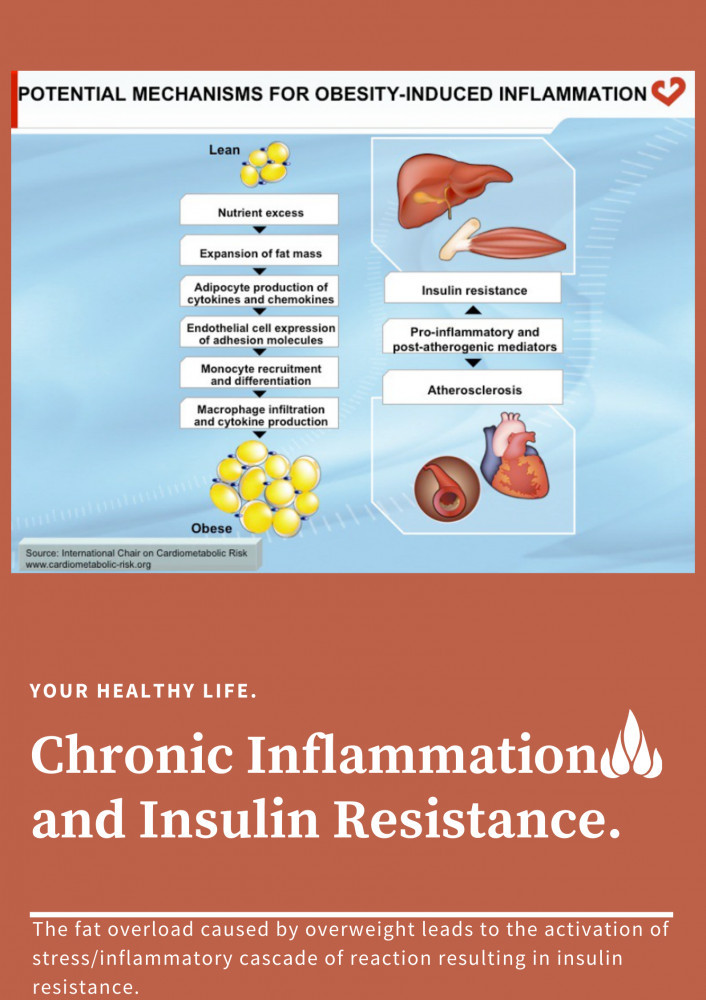 Millions of people, particularly in the US, are attacked by type 2 diabetes mellitus as a substantial number of people are being diagnosed each year. Obesity is generally a major cause of insulin resistance in type 2 diabetes mellitus. However, recent developments in research prove that low-grade chronic inflammation also causes this metabolic dysfunction.

Inflammation is a condition in which a physical action triggers an immune response, which may cause the body to become swollen, hot, reddened, and sometimes painful. Chronic low-grade inflammation refers to the production of a steady, low level of inflammation throughout the body due to a small increase in immune system markers seen in the tissue or blood.

Chronic low-grade inflammation linked with obesity has been notified to lower insulin signaling. Inflammation usually leads to a cell-independent (cell-autonomous or not caused by other cells) hepatic (liver), muscle, and white adipose tissues (WAT) insulin resistance.

Low-grade inflammation may be caused by the excess consumption of food, which causes an increase in lipid storage in the fat storage cells (adipocytes). The fat overload caused by overweight leads to the activation of stress/inflammatory cascade of reaction resulting in insulin resistance.

These signaling inflammatory pathways generally lead to the production of proinflammatory cytokines, particularly TNF-α. Your TNF- α cytokines are what causes insulin resistance by triggering the catabolism of lipids to fatty acids and glycerol in the adipocytes (adipocyte lipolysis). TNF-α also causes an increase in glucose uptake in the fat storage cells found in the belly and skin and induces insulin resistance in the visceral or abdominal adipocyte. TNF- cytokines are higher in obese people than in non-overweight individuals, and males have more of them compared to women. This implies that obese males are most likely to suffer from insulin resistance.

Furthermore, the gut microbiota has also been confirmed to cause inflammation. Obese people have been identified with different bacteria, which is not the case with slim individuals. The presence of these bacteria alters intestinal permeability, spikes lipopolysaccharide absorption, and induces the activation of certain receptors that activate inflammation and this eventually leads to insulin resistance.

Steroids are man-made chemicals designed to work like hormones and are often used to lower inflammation. Examples of steroid medications include prednisone, cortisone, prednisolone, dexamethasone, etc.

Diabetics taking steroid medications may experience an increase in their blood glucose level since these medications are known to alter insulin sensitivity leading to insulin resistance. They also cause the liver to release stored glucose into the blood as they make this organ resistant to insulin.

Steroids induce insulin resistance at the level of the muscles by causing a 30-50% reduction in insulin-stimulated glucose uptake and a 70% reduction in insulin-stimulated glycogen synthesis. They are also responsible for the catabolism of proteins which raises serum amino acids thereby altering insulin-signaling in the muscle cell. Steroids also promote lipolysis, increasing the levels of free fatty acids which lead to insulin resistance.

Make sure to consult your physician if you wish to commence taking steroid medications so that your blood glucose level will be under proper check.